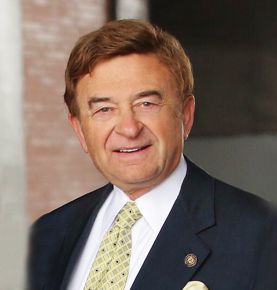 Ronald J. Resmini was in born in Providence in 1942. He is a graduate of LaSalle Academy, and Providence College, where he majored in economics and participated in the Reserve Officer Training Corps (ROTC). Upon graduation from college, he was commissioned as an infantry officer and sched- uled to deploy to Vietnam the following February. Despite his efforts, he could not go earlier, so he applied to graduate schools while awaiting his active duty assignment. He attended Suffolk University Law School and eventually applied for a deferment. Ron obtained his deferment, was promoted to first lieutenant, and finished law school in 1968. After law school, he served in active duty in both Fort Benning and Fort Devens, eventually reaching the rank of Captain. Toward the end of his active service, he met with two attorneys who had also served in the military, Paul Baillargeon and Gerry DeMaria, to seek advice on career paths. According to Resmini, both attorneys advised him to pursue a military career, rather than law. Following this advice, he sought a career commission, but was denied. So, he came back to Rhode Island and clerked for Rhode Island Supreme Court Associate Justice Powers. After his clerkship, he joined Coia & Lepore, but was politely told to “beat it” after a short period of time. Thereafter, he went into practice for himself with Bobby Colagiovanni and Jeff Fornaro, forming a firm that evolved into The Law Offices of Ronald J. Resmini, Accident & Injury Lawyers, Ltd. where he continues to practice today with his three sons, Jason, Adam, and Andrew. He has built a prolific personal injury practice, obtaining numerous verdicts on behalf of his clients. In addition to his personal injury practice, he served as an adjunct professor, a offered CLE pro- grams through the Bar Association, and published a volume of books on Rhode Island practice. We had the opportunity to sit with this veteran of the Rhode Island Bar. Excerpts from our conversation follow.

What was your most creative legal argument?
Smith v. Keller Ladder. Falling from a ladder, my client had a busted nose and a fractured elbow. So a ladder expert from Illinois comes in. Big, tall guy. And he takes the stand, and says, “I think your client took the peen off the end of the rod [of the ladder] after he fell, you know, to look like it was a defect in the ladder.” This is where my ADD (attention deficit disorder) comes in. That night, at my home, I got an exemplar ladder. The real ladder was in evidence. So I do my thing with the ladder at home. The guy is on the stand the next day. I said, “Why don’t you show us how to do that?” So he gets off the stand. He’s holding the peen, trying to turn the knob. And he said, “I can’t do it. I need a pair of pliers.” I said, “Really? Here you go. Here’s a pair of pliers.” I had a pair of pliers in my suit, which I tried the night before. He can’t do it. He said, “I need a wrench.” I said, “Oh, you need a wrench? Here’s a wrench.”

Who was your most formidable opponent?
They’re all good. There’s nobody out there, I said, “Great. Oh, I can’t wait to get him again.”

Would you do it all over again?
Absolutely.

What advice would you give to somebody who is just getting out of law school?
You make certain sacrifices and try to do what’s good, and if you happen to get the awards you like to get, so be it. But if you don’t, you have the satisfaction of knowing that you’ve done something that can benefit society. You’ll always make enough money to do the major things in life. Have a lobster once in a while, go to Disney World with your kids, have an air conditioner, and have two toilets in your house. Other than that, the rest of it is irrelevant. It’s totally irrelevant.

To what do you attribute your success as a lawyer?
No question about it. I became successful because I was afraid of failure. I never tried to be successful. I just tried not losing. Also, I’m very good at what I believe in. I’d suck if I wasn’t good at it. You could never put me in a position to do a job that I didn’t believe in. I wouldn’t be any good at it at all. When I lose a case and I go home at night to go to sleep, I sleep like a baby – I wake up every hour and cry! That’s what being a lawyer is like.