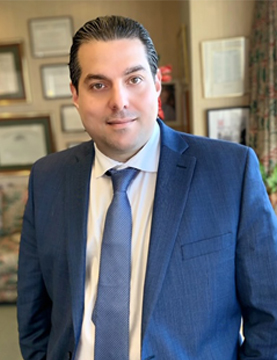 Charles joins the Law Offices of Ronald J. Resmini with proven results as a solo practitioner and a passion for getting injury victims the justice they deserve. Charles grew up in North Providence, Rhode Island and attended North Providence High School. He graduated from Roger Williams University in 2006 and Roger Williams School of Law in 2009. During his second year of law school, he participated in the trial team and competed regionally. Just out of law school, Charles landed his first job at Gaebe & Kezirian.

Solo practice for Charles began in 2015 after a sleeping driver rear-ended his father’s car. Charles negotiated a favorable settlement for his father. Charles also picked up some experience in criminal defense when his friend told him that his juvenile son was going to be represented by a public defender. Charles stepped in, took the son’s case for no money and negotiated an NFT (“no further trouble”) with the prosecutor. Charles also represented a subject witness in a high profile federal matter and demonstrated toughness against tough and seasoned federal prosecutors in both Massachusetts and Rhode Island. No charges were brought.

Charles’ first introduction into litigation came in September of 2016 when an injured Plaintiff asked him to take over a medical malpractice lawsuit that had been filed back in 2010. The case was on the verge of being dismissed for lack of prosecution and stood no chance of making it to trial. Not a shred of discovery had been done. Charles fought every inch of the way to keep discovery opened for his client long enough to obtain critical facts and documents, take important depositions, and win key motions. He eventually got the case certified for trial and heads into his first trial this October. In March 2018, Charles represented a woman in an assault and battery claim. Judgment was entered against the defendant in that case in February of 2019 just after the defense attorney handed over the settlement check in open court.